Published on Jul 27, 2012
The 1955 24 Hours of Le Mans began on 11 June 1955, with Pierre Levegh behind the wheel of the #20 Mercedes-Benz 300 SLR run by Daimler-Benz. American John Fitch was Levegh's assigned partner in the car, and he would take over driving duties later. Competition between Mercedes, Jaguar, Ferrari, Aston Martin and Maserati was close, with all the marques fighting for the top positions early on. The race was extremely fast, with lap records being repeatedly broken.[1]

At the end of Lap 35, Levegh was following Mike Hawthorn's leading Jaguar D-type, just as they were entering the pit straight. Hawthorn had just passed Lance Macklin's slower Austin-Healey 100 when he belatedly noticed a pit signal to stop for fuel. Hawthorn slowed suddenly in an effort to stop rather than make another lap. Hawthorn's Jaguar, with the new disc brakes, slowed much more quickly than other cars using drum brakes, such as Levegh's Mercedes. The sudden, unexpected braking by Hawthorn caused Macklin in the Healey to hit his brakes, throwing up a small cloud of dust in front of Levegh, who trailed close behind. Macklin then swerved across the centre of the track, attempting to re-pass the slowing Jaguar, but also apparently out of control.[1] Macklin had not noticed both Levegh and Juan Manuel Fangio, in another 300 SLR, approaching rapidly from behind. Fangio was in second place at the time, but directly behind, and attempting to lap Levegh.

Levegh, ahead of Fangio on the track, did not have time to react. Levegh's car made contact with the left rear of Macklin's car as he closed rapidly (at about 150 mph) upon the slowed car. When Levegh hit the Austin-Healey from behind, his car became airborne, soaring towards the left side of the track, where it landed atop the earthen embankment separating spectators from the track itself.

Levegh's 300 SLR struck the mound at such speed and angle that it was launched into a somersault, which caused some parts of the car, already damaged and loosened by the collision, to be flung from the vehicle at very great speeds. This included the bonnet and the front axle, both of which separated from the frame and flew through the crowd. The bonnet decapitated tightly jammed spectators like a guillotine.[3] With the front of the spaceframe chassis—and thus crucial engine mounts—destroyed, the car's heavy engine block also broke free and hurtled into the crowd. Spectators who had climbed onto trestle tables to get a better view of the track found themselves in the direct path of the lethal debris.[1] Levegh was also thrown free of the tumbling car, fatally crushing his skull when he landed.

As the remains of the 300 SLR slowed its somersault, the rear-mounted fuel tank ruptured. The ensuing fuel fire raised the temperature of the remaining Elektron bodywork past its ignition temperature, which due to its high magnesium content was lower than for other metal alloys. The alloy burst into white-hot flames, sending searing embers onto the track and into the crowd. Rescue workers, totally unfamiliar with how to attack a magnesium fire, poured water on the inferno -- greatly intensifying the fire. As a result, the car burned for several hours. Official accounts put the death total at 84 (83 spectators plus Levegh), either by flying debris or from the fire, with a further 120 injured. Other observers estimated the toll to be much higher.

Fangio, driving behind Levegh, narrowly escaped the heavily damaged Austin-Healey, which was now skidding to the right of the track, across his path. Macklin then hit the pit wall and bounced back to the left, crossing the track again. He struck the barrier near the location of the now burning 300 SLR, causing the death of another single spectator, although Macklin survived the incident without serious injury.

The race was continued, officially in order to prevent departing spectators from crowding the roads and slowing down ambulances. An emergency meeting of the Daimler-Benz board of directors was convened by midnight at the request of John Fitch.[4] Mindful of sensitivities involving German cars in a French race just 10 years after the end of World War II, they decided to pull out as a sign of respect to the victims. Eight hours after the accident, while leading the race, the Mercedes team withdrew the cars of Juan Manuel Fangio/Stirling Moss and Karl Kling/André Simon. Mercedes invited Jaguar to also retire, but they declined.

Porsche: Our Mission for Le Mans 2014

Porsche in Le Mans 1971: The race of records 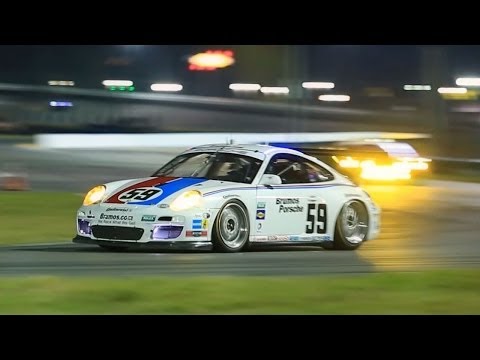